Available for iOS and Android phones and tablets

All data lives on servers outside of the app, making it easy to update without needing a developer

Hundreds of high-quality images of bark beetle species' with information about their tribe at your fingertips.

Thanks again for creating the spectacular app for us. It is a little bit of a game changer in our research community. We got some really super positive feedback! 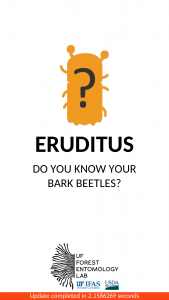 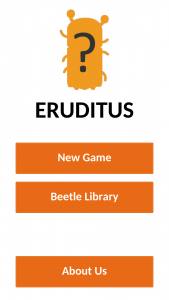 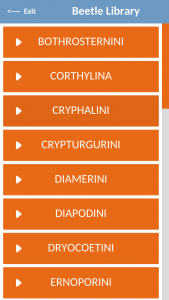 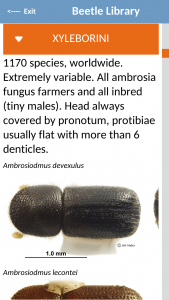 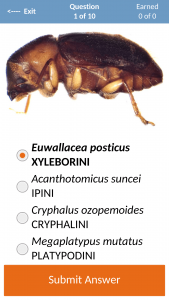 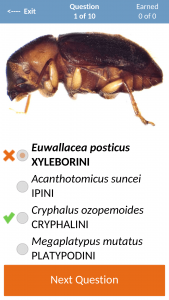 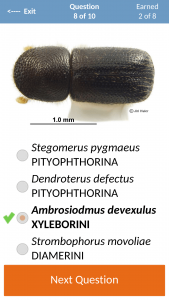 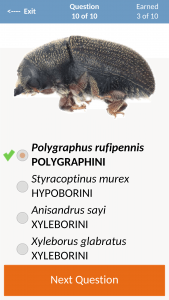 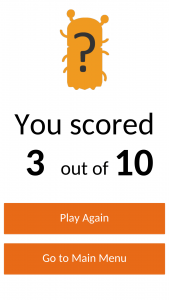 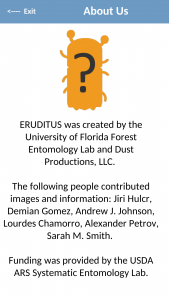 Dust Productions took this project from concept to completion.  After our meeting to discuss the goals for the app, Dust Productions put together flow diagrams to make sure we had a shared understanding of how the different systems should work together.  Our first milestone was to achieve basic functionality, which took a little less than 2 weeks.  Once we had the quiz, menus, and scoring, we were able to move on to displaying the beetle database.  We presented the app to the stakeholders for review and made a few rounds of improvements.  Afterwards, we moved forward with releasing the app on the apple App Store and the Google Play Store.  We put together the store pages, including making marketing assets, gathering screenshots, and writing the app descriptions.  During this time, we were also running internal tests to find any issues for different devices and hardware.  We fixed a few display issues with the app, and published the app approximately 6 weeks after beginning development.

The last thing to mention with this project is how the app's data (pictures of bark beetles and tribe descriptions) are hosted with Amazon servers, which allows the stakeholders the ability to update the app whenever they like.  It's as easy as dragging and dropping the files onto a web page, and the app will get the updates when it is loaded next.  This gives the team the agency to continue improving the app without the need for developer intervention, which they greatly appreciate.  Overall this project was a great success, and I ended up learning a thing or two about beetles that I never would have known otherwise!